German army Captain Juergen Moeller has a new book dealing with the venture of the WWII V US Corps movement to the river Saale and Unstrut and the occupation of the City of Naumburg in April 1945.  The book is in the German language.  It is soft cover, 200 pages, 8 X 5 1/4 inch size, has pictures, color maps and drawings.  A great reminder of   the conquest and ocupation of Central Germany.

THE BATTLE FOR LEIPZIG 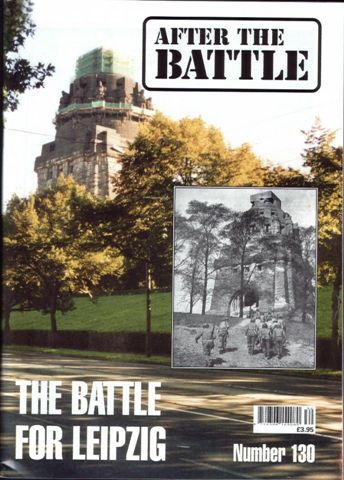 AFTER THE BATTLE, Number 130

By mid-April, 1945, the capital of Saxony in eastern Germany was one of the last big cities that hadn't yet fallen to the Allied armies invading Hitler's Germany from East and West.

With a population of 750,000, Leipzig was Germany's fifth largest city. Founded in 1160 at the confluence of the Weisse Elster and Pleisse rivers, the city had grown to become a centre of traffic, trade and culture. It was here that Martin Luther preached his first sermon in the impressive St. Thomas Church, where Bach played the organ, Goethe studied and Richard Wagner was born.

HERE IS LEIPZIG, THEN AND NOW

In words and pictures, this is the story of the battle for Leipzig. This British-produced magazine has 55 pages of color and black-and-white photos, before and after the war, the history of the fighting, and the Units involved. Read all about the exploits of the 69th Infantry Division and its attached units in liberating Leipzig. Everyone in the 69th who was there, or their family members, should order this excellent magazine as a keepsake or gift.

To order, send a $11.95 check or money order (including first-class shipping) to:

www.rzm.com/magazines/atb/afterbattle130.cfm   Or order by credit card by e-mail or a toll-free call:

One hundred ninety four pages of English/German text of the link-up days including full
examination of The Fox Report, exhaustive studies of American, Russian and German archives
which were only made available in recent years, accompanied by many photographs and maps.
Also interviews with participants in the 1960s and until their their demise, and present living
Patrol members. Book size - 9 3/4 inch square x 1/4 inch.

Dr. Niedersen was the leading historian to promote the Elbe Days festivities at the Memorials on the meadows of the Elbe,
in Torgau and Strehla, until this function was taken over by governmental facilities.
He organized the parades over the bridges. He invited American, Russian and German soldiers to attend,
and take part in forums to fully discuss the happenings of those historic and eventful days.
This is his second and much more detailed book available in English to the American public.

Silvashko was a guest of The City of Torgau, along with other Russians, at the 60th Anniversary Link-Up activities,
and forums conducted by Dr. Niedersen, April, 2005. Also attending were 69ers who were on the 2005 Guided Tour
conducted by the 69th Infantry Division and Edgar A "Bud" Parsons and Joe Lipsius who were City of Torgau guests.

The price of the book, ELBE BEGEGNUNG LINK - UP, is $40. It will be shipped from Germany but
ordered from:

This report was written by Captain William J. Fox*,  2nd Information and Historical Services  V Corps, led by Major General Clarence R. Huebner.  The V Corps was under the First Army, commanded by General Courtney L. Hodges, a part of the 12th Army Group under General of the Army Omar N. Bradley.

Pfc. Harold R. Brummel, Co G 273rd Infantry Regiment, Lees Summitt, MO, last known member of Patrol No 1 led by 1st Lt Albert L. Kotzebue, Co G 273rd Infantry Regiment, the first Patrol to meet the Russians, April 25, 1945, is the source of this report.   Brummell says years ago he was asked if he wanted a copy by whom he does not remember.   In March  2005, while exchanging messages with Major Joseph Lipsius, Headquarters 272nd Infantry Regiment for material for use on the 69th Infantry Website, Brummell revealed having this report and furnished Lipsius a copy.

Added to the report are the following maps:

What follows is page 1 (as an example) of the 51 page Fox Report reproduced in its entirety.  Included extra are 2 maps in color and a third map in black and white.  It contains narrative and interviews with important American military figures of the history making Linkup of East Meets West, April 25, 1945, written by Captain William J. Fox, 2nd Information and Historical Services V Corps.  There are no photos.

Captain Fox accompanied the Major Fred W. Craig's patrol  that met the Soviets at Clanzschwitz, Germany, at 1600, which turned out to be the third meeting of  the two armies.

Especially trained in the army style of seeking the who, when, where, what and how, Captain Fox conducted interviews a day or so after the Linkups with the most important 69th commanders issuing orders, and patrol leaders, to prepare this historic document detailing  the happening of April 25, 1945.

It has  been used as reference and quoted in superbly authored Linkup books. This is the first time it has been reproduced and made available.

The report is in an 8 1/2 X 11 spiral bound booklet with a stiff clear plastic front and black paper board back.

Please include Unit, Telephone and E-mail address, if any.

Click "Next Page" to view the example of the Fox Report... Click anywhere on the image to enlarge it.